Trying to draw strict borders around consciousness is like trying to stick post-it notes on the ocean. 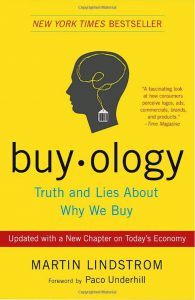 Buy-ology: Truth and Lies About Why We Buy, by Martin Lindstrom

I read this book a few months ago and thought that it would be great to share with the reader some of the most interesting cases of Neuromarketing explained in the book. It is very illustrative of some the misconceptions that still exist among brand managers when they decide to launch a product or a campaign without conducting proper market research. Buy-ology:Truth and Lies About Why We Buy, by Martin Lindstrom (Currency, 2010) talks about Neuromarketing using examples that are wonderful and very illustrative. Martin Lindstom is a Danish author and a columnist for TIME Magazine, Harvard Business Review and frequently contributes to NBC’s Today show.

Tricks Companies Use to Manipulate Our Minds and Persuade Us to Buy, is his first title written for consumers, for which Lindstrom conducted a $3 million word-of-mouth marketing experiment– inspired by the 2009 film, The Joneses – to study the effects of social influence on purchasing decisions.

Lindstrom has been involved in hundreds of Neuromarketing experiments and has used fMRI (functional Magnetic Resonance Imaging) to explain some of his theories. This type of resonance measures the magnetic properties of hemoglobin (the components of red blood cells that carry oxygen throughout the body). That is, an fMRI measures how oxygenated the blood is in the brain and can mark areas as small as 1 millimeter.

When the brain performs different activities, it demands more oxygen and glucose. So the more intensely a certain part of the brain works, the greater the oxygenated blood flow to that section. During an fMRI, that area will shine with a strong color.

By following these activated areas, neuroscientists can determine which part of the brain is working and thus identify according to brain maps what is the function of each of those areas (for example, memory, or speech, or control of emotions, or sadness, etc.)

The largest neuromarketing study ever done

It was a study in London, about smokers. All participants smoking Marlboro or Camel.

At that moment, the medical issues related to smoking implied a social cost of approximately $167 billion per year … however, cigarette makers continue inventing ‘innovative ways to kill us’. For example, Philip Morris created a ‘Marlboro Intense’: a mini-cigarette with high nicotine content and lasted only 7 puffs, to be smoked during those moments where one does not have too much time, but craves a cigarette, for example between work meetings or a short break.

Studies have shown that smoking levels seem to indicate that smokers selectively choose to be blind to the labels and messages that “smoking kills”. Are smokers braver than usual? Or secretly believe themselves immortal? Or do they realize the danger but they just don’t care?

Exactly this is what the fMRI in this study tried to answer. In 2004 the study was carried out, with a cost $7 million dollars (paid by 8 companies).

They used an fMRI and an electroencephalogram called SST (steady state typography) that measures brain waves in real time.

All the necessary measures were taken to avoid any biases and participants were carefully recruited. The questions during the study were:

Results from the fMRI were totally unexpected: the hazard warnings that are put on the cigarette packs front, sides and in the back did NOT have the effect of suppressing the craving for smoking. Zero!!! That is to say, that the horrible photos that we now see in all the packs, plus the millions of dollars spent on campaigns against smoking and all the regulations shared by dozens of governments and countries, are just a waste of resources and time.

But this is not all. According to the study – notices that smoking kills, causes emphysema, heart failure and other chronic conditions – actually STIMULATED the area in the brain known as nucleus accumbens, which is exactly the craving area in our brains. It is the region of the brain that is activated when the body has a craving (be it alcohol, food, drugs, sex or gambling).

In summary, the fMRI showed that the notices in the packs not only do not serve to move smokers away from cigarettes, but rather, encourage smokers to light a cigarette.

Although responding to the questions asked in the study, most participants verbally said that they are affected by the pictures and notices on the packs (maybe because they thought that this was the expected answer, or because they felt guilty) … the reality is that the participant’s brain showed a totally contradictory truth.

We all have behaviors for which we do not have a logical explanation. And this is truer than ever, because of the world we live in, full of stress, on information and technology, where there are terrorist threats, political battles, earthquakes, floods and violence.

The more stress we have, the more frightened and insecure we feel, and the more irrational our behavior tends to be. For example:

In 2005, $7.3 billion was spent on market research in the USA. In 2007 this number went up to $12 billion … and this does not include the amount spent on marketing, packaging, commercials, banners, payment to celebrities who advertise the product, etc. and that could perhaps increase the figure to $117 billion. (In 2005, 156 thousand products were launched globally, equivalent to a new product every 3 minutes)

But if these strategies still work, why do they fail 8 out of 10 products released to the market? Because what we say in a group session or survey may not correspond to the reaction we are having in some section of the brain.

Marketing of the future: more fear

Maybe that’s why Bush after the 9/11 event answered the question “what should Americans do?” And he said “shop”.

Neuromarketing continues in its childhood. And although we may never find the button that orders “purchase”, it will help predict trends and preferences.

Corette is a pleasure to work with. She is very knowledgeable; a creative problem solver who goes above and beyond, and is very easy to work with. In conducting research for us in South Africa, she arranged every detail for a complex project that went off without a hitch. She won over the end client… END_OF_DOCUMENT_TOKEN_TO_BE_REPLACED

When Rebecca (Bryant) first proposed her Think Global colleagues for a multi-country project, I was concerned about using independent researchers in each country that were not as familiar with our business needs and our internal corporate culture. However, after a series of discussions and conferenc… END_OF_DOCUMENT_TOKEN_TO_BE_REPLACED

In regards to the benefits of working with Véronique there is an immeasurable advantage to collaborating with a local researcher on cross-country research.  Beyond her ability to simply translate the findings and perform the groups, she added cultural understanding of the market and a great amount… END_OF_DOCUMENT_TOKEN_TO_BE_REPLACED

During my tenure as a marketing research professional for both IBRC and the High View Consulting Group, Ilka has provided very effective qualitative research services in the various European countries. These services have included very specific recruitment efforts, custom tailored facility preparati… END_OF_DOCUMENT_TOKEN_TO_BE_REPLACED

This paper (written by Piyul Mukherjee and Pia Mollback-Verbic) takes cross-cultural research to a new level, not least by providing a framework that guided the development of the research approach. This paper illustrates far better than most how decision-makers can be mislead by what consumers say … END_OF_DOCUMENT_TOKEN_TO_BE_REPLACED

We’ve been impressed with both the depth of information and how immediately actionable it is for us. We’ve worked with Rebecca (Bryant) for nearly 20 years, but she, with the rest of the Think Global team, really raised our expectations regarding what the right qualitative researchers can accomp… END_OF_DOCUMENT_TOKEN_TO_BE_REPLACED